I am a sideline activity / functional hobby photographer. Some years have already passed behind the camera and time to the early stages of my interest turned to images of people.

After getting my first camera I mainly took photos of nature and objects. I got to know the secrets of filming and I studied the use of the camera. Cautious steps, I decided one day to take photos of my friend who was willing and interested to help me.

This photo shooting wasn't the ultimate outcome, but the spark was kindled, and since then my interest was transferred to humans.

At the first stage I practiced with loved ones and quickly I found my way, and my interest was strengthened. That was the beginning of the search for models, at the first it was slowly ja hard. At the beginning I took photos a few from time to time. But then taking photos became serious and I used more and more my time among photo shooting. I updated my equipment's and purchased more and more things.

Now I am happy with all of my gears. (Of course more is always more and maybe I will still buy something ''small'' :)

Today the most of my free time goes among photo shooting people.

Over the years, I have had the honor to get to work with many interesting people. I have made also a few new friends which is awesome. The joy and the honor is also the fact that I have models from all over the Finland. Not forgetting all the people which are different generations and different age groups.

Over the years, I have found my pictures in the internet's wonderful world as well as magazines. And I think it is awesome that a few first-timer has found a built-in model and they have ended up model agency's lists.

"In a nutshell, easy and easy-going teamwork in particular. Photo shootings and timetables are easy to organize and plans are made for changes if necessary. Gets easily excited about new ideas, casually tosses some new ideas into the air and develops those ideas further. Work quality has developed always more and more. He hasn't never released a bad set."

"We have made a teamwork with Toni as a long time. First time I was nervous, but Toni made me relax very quickly and after that it has been so easy and natural to be in front of the camera. We have photo shoot as some basic portraits as a beautiful nude pictures. As a photo shooter Toni is a professional, he owns a lot of creativity and he encourage always to make your best. I recommend him warmly.."

"As being as a brilliant photo shooter he also gives professional guidance for the model if needed. He possesses brilliant ideas and views. Working with him is an effortless." 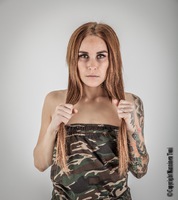 "He has developed a lot over the years. If needed I will ask if Manninen could photograph me also in future. He is a nice guy in every way. I have always been pleased to the photo shoot's outcome."